The Museo Archeologico Virtuale in Italy Has Virtual Floor Dust

Also discovered today that you can go to the footer on Facebook and change your language from English (US) to English (Pirate). It really is like learning a second language, trying to navigate in pirate ("T' spy on all th' parrots scrabblin' at th' door, stab the link below," for example). Which brings me to a recent musing, "Will pirates be out of fashion this Halloween, due to all the goings-on in Somalia?"
Posted by Unknown at 8:30 AM No comments:

You know you hate making salad

(cross-post from Board Game Doc)

The article is called 7 Great Documentary "Characters" and it's one more reason I wish I got The Documentary Channel.

One thing I have to say: Billy Mitchell may not be quite the villain he was edited/portrayed as in The King of Kong, but he IS undeniably an interesting character, so I think it's OK that he's included here.
Posted by Unknown at 11:11 AM No comments:

Trailer 2 - The Hunt For Gollum
by HuntForGollum

You can find more information on their official website, The Hunt for Gollum:

Welcome to the website for The Hunt For Gollum; a 40 minute independent film inspired by The Lord of the Rings which is to be released to the internet for free on May 3 2009.

I for one certainly look forward to seeing this film!
Posted by Unknown at 7:22 AM No comments:

Labels: the lord of the rings

Man vs Wild starring Will Ferrell

This is a mashup I'm just going to have to see. According to Geeks of Doom, Will Ferrell has gone on a Man vs. Wild expedition in the mountains of Sweden with Bear Grylls. It's all to promote his new movie, Land of the Lost.

I loved the original Land of the Lost series, but the film's not really on my radar (most films aren't these days, until they hit Netflix). However, I'll definitely make a point to catch this episode of Man vs. Wild, for pure curiosity factor. It's supposed to air around June 5. 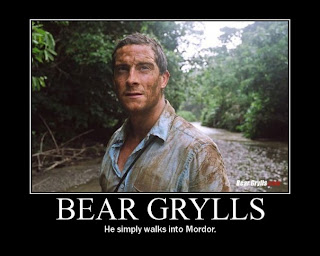 Posted by Unknown at 9:13 AM No comments:

We didn't start the flame war

See more funny videos and funny pictures at CollegeHumor.
Posted by Unknown at 6:26 AM No comments:

I am SO sorry I just got the iced coffee at McD's! I'm going to make a point of hitting the local Burger King next time to show my appreciation. The only thing that could have made that better would have been a shot of Beavis & Butthead dancing.

The US Postal service put up the details today on their website about the recently announced Simpsons postage stamps, and you can now pre-order (they go on sale May 7).

Hard to believe the series has been around for 20 years! Check out the USPS site for more details or to pre-order.

*insert cliche Simpsons exclaimation*
Posted by Unknown at 5:44 AM No comments:

A few days ago, I read on Geeks of Doom that a new Lovecraft movie might be on the horizon.

It’s being reported that former geek, present directing god — Ron Howard may be finally bringing H.P. Lovecraft to the big screen; though it won’t be quite how we expected to first see the master horror writer appear in film. Howard would be making the movie based on the Image Comics’ graphic novel, The Strange Adventures of H.P. Lovecraft.

I would personally prefer Guillermo, and it was reported that he WAS doing something Lovecraft, but I guess maybe right now he's busy getting ready to start shooting the 2-or-more-part The Hobbit next year. I really REALLY hope that doesn't wind up shelving the plans for At the Mountains of Madness, which Guillermo referred to as his "Lord of the Rings."

Previous Lovecraft movies aren't PURE awful, mind you, not like the attempts at bringing Dungeons & Dragons to the screen, but they just haven't really captured the essence of Lovecraft, at least not for me.

This morning, @debasispradhan tweeted about a Lovecraftian short film on IMDb based on The Book. The short is 10 minutes or so, and the pacing is slow. That's true to the literature, but I don't know if it makes for good film. Bear with it though, it does start to pick up steam in the second half. What I like most is that the mood is very serious. The teeth scene on is pretty good.

So now that I had Lovecraft on the brain, I did a Twitter search, and found this, from @ironmammoth:

YES! THAT was sufficiently creepy (please please don't be an April fool's joke.)

This'll tide me over, but it just serves as a reminder that we NEED a good treatment of this brilliant source material, and it seems that the geek community is in overall agreement on that: 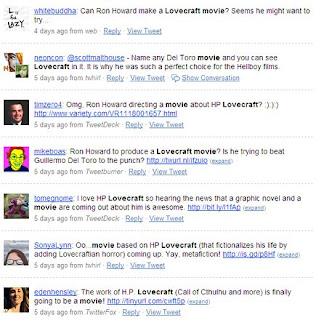 Something I just realized I need, though:

Now that I think about it, my life is severely lacking in Lovecraft paraphenailia...

Posted by Unknown at 6:55 AM No comments: