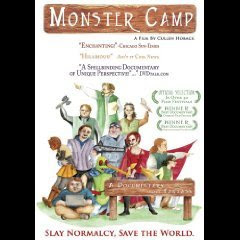 Monster Camp is a rare and fascinating glimpse into the world of live-action role playing or "LARPing," a real-life version of "World of Warcraft" where gamer stereotypes are simultaneously shattered and confirmed.
The most recent item unearthed in my geekumentary quest is Monster Camp, a LARP documentary released in 2007 chronicling the activities of the Seattle, Washington chapter of NERO, a well-established LARP association with chapters all over the country. Apparently, the NERO scene on the East Coast is livelier (not surprising, given it stands for New England Roleplaying Organization), and the relative lack of support staff to run these labor-intensive events is one of the factors that contributes to the story here.

My husband's played NERO when he was younger, and though he doesn't seem too keen on the possibility of going back now that we're all grown up, I love the stories he tells about zombies attacking taverns, and people venturing off into the woods to investigate the tales of an old witch's cottage.

Monster Camp is not the first LARPing documentary on the scene; Darkon was released a year earlier, and followed a group of Maryland LARPers (definitely check out the trailer), but the flavor of LARP is quite different between the two. Darkon's LARPers are involved in a more political, kingdom-based style of play, while Monster Camp depicts pretty much what I imagine when I think of LARPing; people dressing up in monster costumes and throwing seed-filled beanbags at each other while shouting "Lightning Bolt!"

Between the two, I have to say I preferred Monster Camp, partly because the political intrigue thing just isn't as interesting to me (plus I watched Darkon right after The King of Kong, so my expectations could have been unfairly high for a purely fact-based documentary). Monster Camp did a good job at keeping the story moving, with a good mix of funny and poignant situations. It provided priceless section intro titles like, "Paul's father Steve is a monster." and quotes like, "This is technically my 5th year as a high school senior..." I think this is what they were referring to when they said stereotypes were confirmed, but they ARE then shattered in the sense that you (or at least I) grow to see these guys as human beings with feelings, just participating in a social hobby they enjoy. Or maybe you'll just see them as a freakish curiosity, but if so, the most masterful documentary wouldn't be able to sway you, and you probably wouldn't be reading this. Since you're a cruel and cold-hearted jerk.

I recommend Monster Camp to anyone who's curious about the LARP scene. Darkon's a good movie too, but in the end I think Monster Camp is a more accessible addition to the geekumentary family. But heck, if you're as into geek docs as I am, see them both!

One thing I should warn you about, though, is that they do diss on pen and paper D&D a bit. From what I heard, that remark led to a massive geek gang battle, straight out of Weird Al's Eat It. It was pretty intense, D20s and beanbags flying everywhere, armor checks and critical parries...but that's a story for another time.