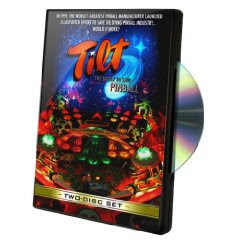 In 1998 pinball was dying, thanks to a saturated market and shrinking player base. Williams, the world's largest pinball manufacturer, prepared to abandon the game that had made it a legend in favor of the more lucrative video slot machine business.

From its nostalgic opening jaunt though pinball history to its heartbreaking ending, employing remarkable animation throughout, TILT: The Battle to Save Pinball is a fascinating case study for anyone interested not just in pinball, but in the march of technology and the intersection of art and commerce.

I've never played a lot of pinball. I like the concept, like the lights and sounds and flipping those flippers, but it's not as if I'm good at it or a frequent player, certainly not a pinball enthusiast. But I'm on this geekumentary kick, and the only way I was going to see TILT was to buy it, so I did.

I'm glad I did, this was a really good one. Not only is the history of pinball an interesting one (it was years before the pair of flippers we're all familiar with were added to the bottom), the story of Pinball 2000 is one of those classic underdog tales. The subjects interviewed, mostly pinball designers and industry people, are not as colorful as the guys from The King of Kong, but I liked them, and I was pulling for them. George Gomez, one of the primary team members for Pinball 2000, made me want to be a pinball designer.

The Pinball 2000 project that the film documents was an attempt to update pinball by integrating video onto the pinball field. It was an exciting concept, and it looked great, and I was genuinely sad that I'd never gotten to see or play one. Only two models were completed, Revenge from Mars and Star Wars Episode 1, and as it turned out, Episode 1 played a large part in killing the project. And I thought I hated Jar-Jar before...

Not only is the feature presentation good, it comes with a bonus DVD packed with almost seven hours of really excellent extras, including a pivotal key note speech from a pinball convention, and a walkthrough on the process of creating a pinball machine. Even the Pinball 2000 launch video shown by Williams to its buyers. They really gathered together everything you could hope for on the topic of pinball.

This film caused me to do two things:

To conclude, if you're at all interested in pinball or documentaries in general, buy this one! You'll enjoy it, and it stands up to multiple viewings.