I've got this sinking feeling that I may not be able to master programming Atari home brews. I think it really codified while I was reading an article on Retro Thing about Nolan Bushnell and the Atari games that came out with the Atari Jr.

In the late 80's, Atari created a smaller & cheaper 2600 ("the fun is back for under 50 bucks!") to compete with Nintendo's NES. The release of the Atari Jr. was flanked by a few new releases from Atari themselves. These games were subcontracted to Bushnell's Axlon company (after he bluffed Atari that his staff had the chops to program for the notoriously difficult 2600). Luckily one of his programmers, Steve DeFrisco, was clever enough to work his magic to create the last few official games for the 2600.

I knew about the 2600's reputation for being hard to program, as I've been reading David Crane's really cool 2600 Magic app on my iPhone. I may have thought at first that since the graphics were simple, the coding must be equally simple. I was wrong about that. Oh, so very wrong.

So I'm reading this Bushnell article and thinking to myself, "C'mon now, are you REALLY going to figure this stuff out?" And really, no, I'm probably not.

And besides, I'm utterly obsessed with NES at the moment. Hmmm... I wonder if people program homebrews for the NES? It would be totally innocent to Google that, right?

And lo, 98-026, a college course on programming for the NES, taught at Carnegie Mellon in 2004. I'm afraid to even click on the "Development tools and resources" or "Assignments from the class" buttons, but it's too late anyway. The idea has a foot-hold. This is trouble.
Posted by Unknown at 8:48 AM No comments:

I don't even know how they did this, but don't question it. Just go play SMB as Simon from Castlevania. Or Samus... 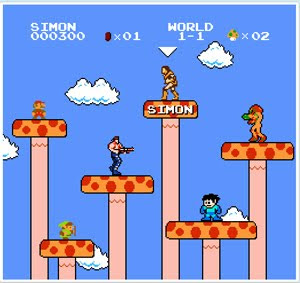 Last night we finished watching Black Dynamite, and I had to share.

The film was made in 2009, but it was made to look and feel like a medium-budget amateur 70's action film, and they went to TOWN on that. It's full of intentional blunders and nuances that give it a delightfully authentic feel. From the occasional boom mic in the shot to the visible cut edits and horrible dialog, this flick delivers:


Go here to watch it in its full HD glory)

It's available on Netflix, and even though the plot gets ridiculously goofy, well... that's because it's supposed to be. I highly recommend it! I will probably buy it, and I hope the director does an encore.
Posted by Unknown at 6:42 AM 2 comments:

An 8-bit collection of Pink Floyd recently rippled through Twitter, followed a few days later by Weezer. It turns out, 8-bit music is as alive and well as 8-bit gaming, maybe even moreso.

Here, in no particular order, is what a little digging this morning unearthed.

First up, thanks to a tweet by @bboru21, I found a site called Pterodactyl Squad, "a video game music netlabel" with a nice collection of free mp3 downloads.

It seems like most of their stuff is original, and would make for really great game room background music. They have a compilation of 8-bit Weezer songs which includes Island in the Sun and Buddy Holly.

There are a few prolific Youtube users cranking out 8-bit renditions. Here are two good ones:

NESsongsrus, who converts everything from classics like Iron Maiden to post-80s artist like Lady Ga Ga and Eminem.

So by now I'm thinking to myself, "Hey, someone should make a Live 365 station with all this 8-bit content..." Naturally, someone has, sort of. 8 BIT RADIO is a channel dedicated to actual gaming music. It is for Live 365 subscribers only (of which I am one, so I can listen to Peter Hirschberg's Retro Arcade Radio station on my iPhone). I'm listening to a piano rendition of the Ocarina of Time theme on it right now, and based on this, would say it's worth the $7.95/month membership fee to access these two stations alone. Especially since it just moved on to a jazz/swing orchestral version of Super Mario Bros. :)

UPDATE: I just discovered a really nice streaming radio station that plays a mix of 8-bit themes and 8-bitized mainstream music (like the Weezer track). It's called 8bit FM, and I highly recommend it if you want to get your classic game on!
Posted by Unknown at 8:00 AM No comments:

I've been noticing a number of iPhone apps that have to do with classic gaming, so I thought I'd share them here.

GAME-RELATED
I've had this crazy notion recently about trying to program games for the 2600. I discovered some very helpful discussions and tutorials for it on AtariAge via a Twitter friend, @JoeShopping. It turns out there are a couple tutorials for this in the form of iPhone apps, by a former Atari 2600 Activision programmer named David Crane (he created Pitfall!).


That's got to be the tip of the iceberg. What else is out there? I've heard rumors that a Collecovision emulator is in development, for one (I think I read that in Retro Gamer magazine recently, I'll try to dig it up)...
Posted by Unknown at 6:15 AM 2 comments: