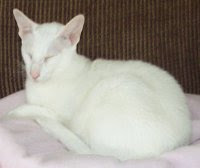 Would you believe, our cat came home Sunday night, after a week and a half on the lam?! I randomly looked out the kitchen window, and there he was in the yard. Overall, he's skin and Bilbones (he pretty much started out that way though), but in good spirits and happy to be home. His sister, on the other hand, is having a freak-out Pet Sematary/Changeling reaction to his return. Hopefully she's wrong about that.

And another beast arrived this week - the arcade machine! It looks MARVELOUS, the red trim is great, and Shawn did a flat-out amazing job on the control panel and wiring. 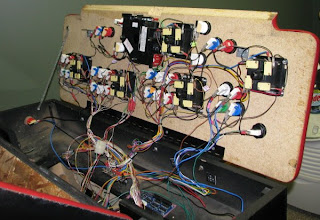 It's going to need a lot of tweaking - the xxxx-in-1 JAMMA board is, we've discovered, FAR from plug-and-play. In many ways it would have been easier to put a MAME-ulating computer into the cabinet, but I'm still happy with the JAMMA setup. Like with MAME, we're going to have to configure the controls for some of the more complicated and multiplayer fighting games, but classic games like Wonderboy and 2-player ones like Dungeons & Dragons seem to work just fine. We've got some learning to do, though, about dipswitch settings, and updating the hard drive so it will play trackball games properly. 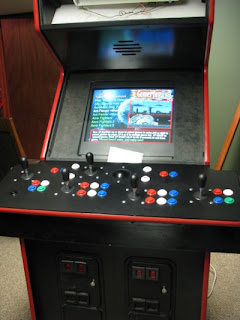 It turned out that the marquee we liked best for it was not the one we originally considered. I did some mock-ups, and the simplicity and red tones of this version won.

In person, The Beast is also much more badass than I expected, and now that I've seen it, I think I will hold off on the side art. I just have this feeling that it would be displeased with cartoony flanks. Besides, I'm going to need that bit of cash to properly 80s-ify The Beast's room. It will need a Last Starfighter poster, and some He-man action figures, at the very least.

In other news, I noticed that a remake of Clash of the Titans is in the works. By the gods! I absolutely loved the original, so this is one of those dangerous yet exciting propositions.
Posted by Unknown at 6:06 AM

Yay Bilbo! He resisted the pull of the Ring after all.

By the way, you were right about Nerdcore Rising. Saw it at SNOB this weekend and it was REAL, yo.