I've had my heart set on my very own Ms. Pac-Man table-style arcade machine for...ever. In the interest of variety, though, I realize it'd probably be best to build one of those MAME cabinets that are all the rage these days. I mentioned this dream of mine to my friend Robert, who said, "I know just who you should talk to about that!" and referred me to Shawn, world record holder in Zoo Keeper, and builder of custom arcade machines. As a hobby. You know, when he's bored. :) 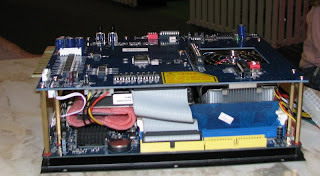 Now at first, the plan was to use our old PC and do the MAME cabinet thing. Shawn suggested an alternative, using a JAMMA board designed for exactly this purpose. If you haven't heard of these (I hadn't), JAMMA stands for Japan Arcade Machine Manufacturers' Association, and it's a standardization applied to most arcade games made after 1985 (however, MANY older classic arcade games like Ms. Pac-Man, Dig Dug, and Frogger are included on the multi-game JAMMA boards). The board doesn't have as many games as MAME of course (currently 1069 + 139), but it may be preferable to sacrificing your computer to the cause, it's designed to go in an arcade cabinet (and therefore, I assume, easier to install), and more titles continue to be added via upgradeable hard drive. Also, though some of the titles in the list are duplicates, it includes almost every game I could want. Plus there's a whole collector aspect of seeking out the individual PCB boards for any particular game you might fancy that's not already on the list (in my case, Primal Rage, for example). You can swap in any JAMMA PCB board you want once you have the setup.

Choose Your Own Cabinet 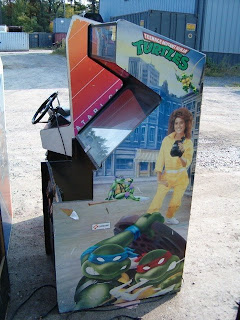 So what will house this savage beating heart of 1200 games? In our case, because we wanted 4-player capability, we wound up going with a Teenage Mutant Ninja Turtles cabinet, which has a 25" monitor (as opposed t the 19" CRT we would have put in if we went the MAME route). Gauntlet was definitely in the running, but it is a HUGE machine, and the monitor is set at a very low angle. I didn't think we'd want to play all games that way. I'm also fond of the Turtles, Rafael in particular. Watched the old cartoon, owned the Krang action figure, and yes, left the theater after seeing the first film singing the theme song with my brother and sister.

One could also make a cabinet from scratch, there are lots of schematics available online for that. In many cases, this will cost you about the same as an existing cabinet, but allows more customization options if you have something elaborate in mind. 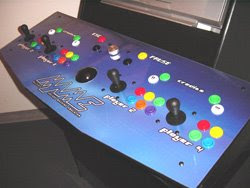 Probably the most complex choice on a custom arcade machine project is the control panel. My husband and I favor different gaming genres - fighting games vs. straight up classics - and those styles require radically different control setups. Then there's the fact that you'll be playing hundreds of different games on this one machine, and it becomes quickly evident that you'll be needing a number of controls.

It took a LOT of thought and discussion, but currently the plan is to have 4 8-way joystick stations, the front two of which will have a six-button setup common to games like Street Fighter. The side two stations will have 3 (scratch that...4) buttons each, because our latest realization was that games like Dungeons & Dragons require 4 buttons, and above all, THOSE are the games we're going to want to play with the kids when they are old enough. It also turns out that 8-way joysticks are really not so good for classic games like pac-man. You need a 4-way joystick for that. And a trackball - don't leave Centipede out in the cold! And that trackball and 4-way are going to need fire and jump buttons of their own and...voila...5th gamer station.

And that's not even covering all the bases. Steering wheel games? Spinner games? Video pinball games? Shooting games? It's fairly impractical to have it ALL, so you have to prioritize what's important to you. The nice thing is, it's not a completely irreversible decision; it is possible to add some of these options later if you decide you just CAN'T go on without A.P.B. (d'oh...you'll need a gas pedal too!)

Next I'll dive into options for pimping the outside of the cabinet. That's a whole new can of worms!

Home Arcade Project, Part 2
Posted by Unknown at 6:06 AM