There's the world of pinball in general, and then there's our own situation, and I figured I'd delineate the two and call the entries where I write about our collection "Personal Pinball Journals." At this point our collection is: The Shadow, Tron, Frankenstein, The Lord of the Rings, and Ripley's Believe it or Not. One of the first things we've been doing when we get a machine is replacing the incandescent bulbs with LEDs. This is a somewhat controversial move; some people HATE the LED look. It's much brighter and colder light than the warm incandescent lights. It can be overdone too, there are different levels of LEDs and some are quite blinding. We go with the smaller ones, but are also keeping the incandescents from each machine in case we trade or sell them and a purist wants the old lights back in. 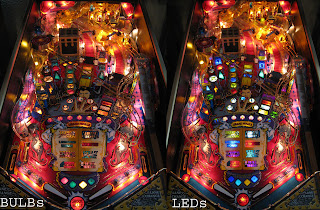 The upside is that LED lights burn cooler and conserve electricity in the long run (check out this post with heat signature comparisons). Some playfield parts can even be damaged by the heat an incandescent puts out over time, like the clock in Twilight Zone. The bigger upside is that it just looks badass! Anyway, that's been a first move for us in most cases. We may not be doing that with Ripley's or Lord of the Rings, but for the others we have. Except maybe Frankenstein, I think it came with some LEDs, in some VERY funky colors I might add. This past weekend, we installed the plastic protectors we'd bought for Lord of the Rings. The machine is in gorgeous shape and we intend to keep it that way. These protectors keep the ball from slamming into and damaging parts of the playfield that tend to be susceptible to that action. We also moved the pins closer together, and I did some careful measuring. We COULD squeeze six into that row, but unfortunately I think it would just be too crowded. It's really hard not to be greedy.