In another piece of news that indicates pinball is alive and well, a new pinball magazine, aptly named Pinball Magazine, has just launched this month.  This magazine includes a 56-page interview.  Even if that were the ONLY thing in it, that's no magazine, that's a VOLUME! 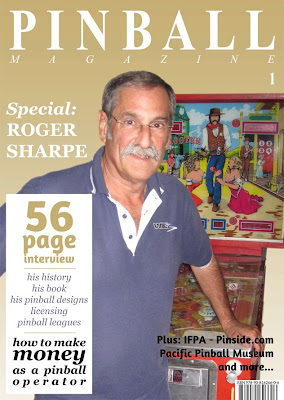 FYI, Roger Sharpe has been an illustrious member of the pinball illuminati for ages, and there's a really cool bonus segment on TILT: The Battle to Save Pinball that talks about how he demonstrated before the New York City council how pinball is a game of skill, and not purely chance.  This caused a repeal of the banning of pinball machines as gambling devices.  Did you even know they WERE banned?  That's a whole other story, but suffice it to say, Roger is a big deal.  He's also written a book about pinball that I have been meaning to order.

I've pre-ordered this of course, and will post a big old review once I get it, but in the meantime if you're interested in ordering a copy (and you should be), go to http://www.pinball-magazine.com/.
Posted by Unknown at 6:33 AM