Jersey Jack Pinball is making The Hobbit next

The Sunday after Thanksgiving started off quietly, like any other Sunday.  We slept in about an hour later than normal, I did a coffee run, and we settled down to a nice lazy morning.  I loaded up the Pinside forums, as I often do, and one innocent little post caught my eye: 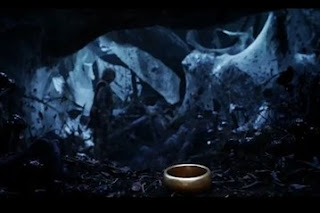 It seemed a distributor in the UK had announced that Jersey Jack pinball machine #2 was officially The Hobbit. It was certainly possible, the most recent information from Jack himself was that the next machine would be a licensed title, and that big news would be coming this month.  In the past there were mutterings that Jack had The Hobbit license rights secured.

This turned out to be true. There are going to be 1,500 Limited Edition versions, and the anticipated scramble is going to be for the 500 new Limited Edition slots opening up. Customers who have reserved a Wizard of Oz LE have first-dibs on the first 1,000 Limited Edition numbers, and they have two weeks to commit or release their reservation. The estimated completion date for this title is July 2014. From now to February, 2013, the cost of an LE is $7500. After February, it goes up to $8,000.  No, it's not cheap. But Lord of the Rings by Stern is one of the most highly regarded modern pinball machines, and there are plenty of LOTR owners out there envisioning a Hobbit next to their LOTR.

Now, there hasn't been a big official announcement on this yet. And if you want a Hobbit pinball machine, there will be however many standard versions the market demands. At this time, nobody even knows what the differences will be between the LE and the standard. But if you want to snag one of those limited edition versions, you should contact Jersey Jack Pinball directly and it can be arranged. Or, wait and see how many WOZ LE owners relinquish their LE options for The Hobbit, and hope to snag a lower number in the production run. This is going to be a long wait, so along the way, probably people will surrender their LE spots here and there.
Posted by Unknown at 7:26 AM