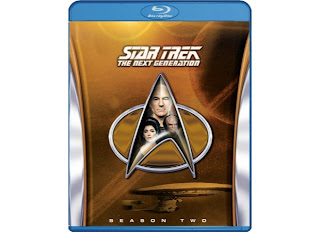 Last night we took the kids to a special showing of Star Trek Next Generation at the local IMAX theater.  This was to promote their new release of the remastered season 2 on blu-ray.

In the car on the way over, we were discussing it, and our agreed opinion was that we wouldn't be getting the blu-ray, because we have the entire series on DVD and that's good enough.  We've recently started watching it with our kids, ages 5 and 7, and they seem to be getting into it.  As one of my friends commented, "You had them watch Farpoint first?!  If they got through that, they will love the rest!"

We were half an hour early and the screening room was already plenty crowded.  They were projecting a series of different shots on the screen, cool imagery but also some before/after shots of the remastering.  I have to say, it was looking pretty good, and those were all it took to convince us, we would probably be buying the blu-ray after all.


The showing kicked off with a big chunk of the documentary included in the new release.  You KNOW I'm a sucker for documentary, so I was delighted.  Also surprised the kids made it through that.  About 45 minutes later, Q Who? was shown.  The kids loved it (especially the hot chocolate spilling incident at the start).  It was also just so cool to be in an audience full of trekkies laughing at Riker's chastisement of Wesley, and just enjoying the show on the big screen.

When that episode ended, they next showed a bunch of blooper outtakes.  Once again, it was fun laughing together as an audience, along with the crew.

There was going to be about an hour more of stuff including the Measure of a Man episode, but we figured we'd pressed our luck far enough and ushered the kids out at that point.  It was a great night though, and as we drove home, my daughter said, "When we get home, can we just settle down on the couch and watch another one?" :)
Posted by Unknown at 7:33 AM