I have sometimes been told that I am "too nice" at work.  There is an unspoken assumption that being nice doesn't get the job done.  That the only way to get the job done is to "get angry" and go head-to-head with other departments, to scream and yell until you get what you want.

I spent a good deal of time feeling insecure about this, feeling like I needed to change.  I also did try to take it constructively, and make sure I was being appropriately assertive about my own department's agenda within the company.  Sometimes the hardest feedback to take is the truest, and I didn't want to dismiss feedback without analysis.

However, I take issue with the base assertion that one can't be nice and still be successful at work.  That one must badger one's co-workers and just blindly push their own projects forward with no regard for the greater company picture, or the priorities of others.  I just can't accept that.

It led me to realize that I don't need to.  You can accomplish far more by earning the cooperation of your co-workers in the long run than by being "that guy" who only cares about his own projects at any cost and instills a fight or flight response in his colleagues.  We should always look to adapt and improve ourselves, but I don't intend to change my approach beyond what I have already, because to do so doesn't make optimal use of my own basic characteristics.  Being nice does get the job done, but often in a less visible and more subtle way.  This can put "nice" employees at a disadvantage, as it is perceived that the "sound and fury" employees are the ones being proactive.

So I made this image as a reminder to myself and others that just because conventional wisdom says you should change, doesn't mean they are right.  Special thanks to Tom Sciortino for making awesome motivational poster photoshop templates available. 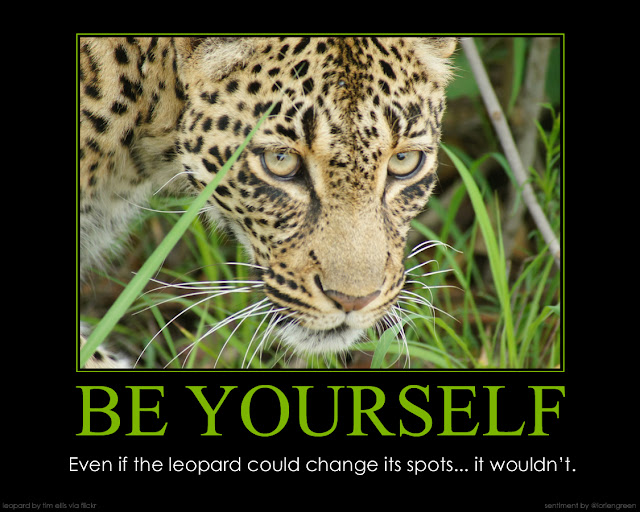 PS - leopards as a species could indeed change their spots, and if there was a significant advantage to doing so, over time, they would.  That's how they got them in the first place.  But as an individual, a leopard has to work with what it's got. :)
Posted by Unknown at 7:30 AM

Labels: be yourself, inspirational