We just got back from Disney, and it was a great time!  Being pinball fans, though, we were on the lookout for any pinball gaming to be had while on vacation.  Gotta get our fix.  We knew there were some pinball machines at Downtown Disney's Disney Quest arcade, but also had heard ominous reports regarding their state of function and cleanliness.

I probably should have, but I just didn't have the heart to take any pictures.  These machines are not being well cared-for and it's just sad.  So many people pass through a place like this, it'd be a perfect opportunity to show them that pinball is still alive.  They've certainly dedicated a decent amount of space to it.  There were something like 7 machines in a row, flanked by two virtual pins that I didn't get a chance to really scrutinize.  There was a Batman, Tron, Pirates of the Caribbean, and a few other reasonably good ones.  But playing this Tron compared to our own was like night and day.  The flippers are weak and dying.  The playfields are filthy.  I don't think they are at the proper angle either, because the ball was drifting more lazily than it should have been. 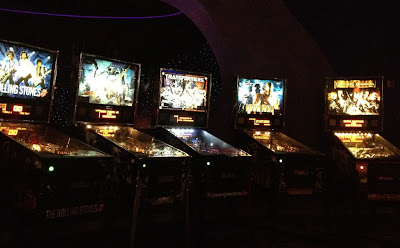 It was my first time playing Pirates of the Caribbean, a machine I'm very interested in, and I could tell while playing that it had so much potential to be fun, but its condition was preventing that.

Why?  Why spend the money and floorspace to put the latest pinball machines here, and then let them degrade like this?

For one thing, one fee gets you in the door and everything's on free play.  There's no motivation whatsoever for whoever operates these machines (I'm told it's Disney) to keep them in tip-top condition.  A fun play experience won't get them any more revenue than a mediocre one.  Unfortunately, the result is that people think THAT is what pinball is like.  Boring and frustrating.

I was strikingly reminded of those commercials with abused animals.  In exactly that way, it made me want to take them all home and treat them properly.  I think I had a taste there of one reason people wind up with huge pinball collections.  I felt a strong emotion of curation; of wanting to take care of something and maintain its beauty.

I am going to try to find the right person to contact and throw out a plea for them to give those machines a good cleaning.  It'll likely go nowhere, and I will probably never know either way, but one has to try.  Sadly, I hear things are much the same for pins at Universal Studios, and it's the case at our local bowling alley.  I guess it's nothing new, but I expected more from an empire like Disney.

What it boils down to, at the end of the day, is that a pinball operator needs to be as passionate about pinball as the home collector to keep these machines working as intended.  And while it might seem like a great idea for a home enthusiast with machines to spare to simply contact their local pizza parlor, movie theater, or pub and offer to provide and maintain a pinball machine in exchange for a revenue split, life's not as simple as that anymore.  Rules, regulations, and liability issues simply cannot be ignored most of the time.  There's seemingly no easy way to bridge the gap and create passionate casual (meaning unlicensed without large routes) operators in the face of these issues.  Too bad, because that's how the general public would rediscover the true pinball experience.  It's something I continue to think about.  Where there's a will, there's a way?
Posted by Unknown at 9:00 AM