There's no arguing that Battlestar is THE best show on tv, but Showtime's Dexter is right behind it, or, maybe, next to it...poised with a needle in a dark alley...

Dexter is a series about a blood spatter expert in the Miami police force who also happens to be a vigilante serial killer. But since he only kills the most wicked dregs of society (and does his homework to be sure), you totally root for him. Season 2 just came out on DVD, and Season 3's currently running on Showtime.

From the moment I put in the first DVD I knew I was hooked, just from the intro sequence, which takes elements of the mundane morning routine and makes them feel...murderific? The music's great too.

Dexter is a cleverly-written dark comedy with great characters and cast. I especially enjoy Erik King's portrayal of Sgt. Doakes, the short-fuzed officer who just KNOWS Dexter's up to something, stews and obsesses about it, but can't quite prove it. Michael C. Hall's inner monologue narrative is also well-delivered, clever and engaging, and he does a phenomenal job of pulling off the utterly split personality a serial killer in hiding would need to master. 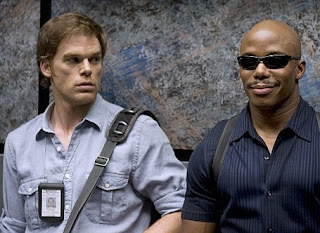 Beyond the quality of the production, another reason I think Dexter appeals is the overlying subject matter, the way it plays with the themes of what lies beneath. It takes one's imperfect dark side and says, "Hey, I know exactly how you feel. Nobody understand the real you." I'm not a serial killer, but I'm sure I'm not the only one that sometimes has thoughts that don't fit with society at large. You know, like cheering for vigilante serial killers... Except in this case, I know I'm not the only one hoping Dexter gets away with it. :)

More and more, I'm noticing that I prefer these premium channel series' to prime time tv (with the exception of Fringe at the moment and of course Battlestar). They don't dumb the subject matter down the way most network tv shows do now. Big thanks to my friend Rick for introducing us to this series. If you don't get Showtime, Netflix it!