Just the other day, I was asking myself, "When is someone going to make a romantic comedy about a kickass pinball-playing chick?" The wait is over thanks to Producer Anna Newman and her team, who are about to unveil the short film Pinball Donut Girl at the 2012 Pacific Pinball Expo later this week.

Watching this trailer, I had so many questions.  A romantic comedy about pinball?  A girl gamer lead? Where did this come from? Was that Attack From Mars OK, and does Brian Eddy know about this? Anna was kind enough to take a moment to answer some of these burning questions in the following interview.


Keeping My Cool: How did you get into film?

Anna Newman: I work in the R&D department at an animation studio, which means I do software development specifically for use in CG films. In 2008 I took an in-house class in cinematography and had a life changing experience. Suddenly I knew what I was meant to do. I served an apprenticeship with a professional director of photography in 2009-2010. On my first freelance professional job, I was literally running up and down a giant hill through weeds fetching and carrying lens filters or holding gear down so it didn't blow over and hit the actor in the head. I still do a lot of that sort of thing, actually.

As a producer, I try to pinch hit wherever I can be of help, including getting water for the cast and vacuuming the location after a shoot. I remember a particularly glamorous evening spackling holes in Mutiny Cafe after we wrapped Pinball Donut Girl. Filmmaking is a marriage of art and very technical science (just like pinball) with a lot of hard physical work moving it forward. It's the culmination of everything I love, and I think I was intended to be a filmmaker.


KMC: How did you get into pinball?

Anna: Prior to researching Pinball Donut Girl, my experiences with pinball were limited to playing a random machine in a childhood friend's garage in the 70s. When I went to California Extreme and the Pacific Pinball Museum, I was blown away. Now I'm a junkie and went to five shows in the last year. I especially love taking still photos of pinball art. I hope to have a game of my own someday.


KMC: What led to the decision to make a romantic comedy about pinball?

Anna: Pinball Donut Girl is 100% the result of a lunch time conversation with one of my software engineering colleagues, Matt Walsh. One day we were reminiscing about college, and he told me this story about his crush on a girl who cashiered at a donut shop. Matt went to the shop all the time to play pinball and eat donuts, and one day he discovered that the girl also played pinball. Not only that, she was a pinball genius.

"Matt," I asked breathlessly, "did you guys fall in love over Gorgar?"

No, he told me, he was young and shy and never had the courage to ask her on a date. He never even learned her name. I became obsessed with this story and wanted to explore what might have happened if he had pursued her. I loved the idea of this blue collar girl who is a pinball wizard hooking up with this shy college guy through pinball. I like to see nerdy girls appreciated. Pinball Donut Girl was the outcome.


KMC: How long has this project taken, and where are you in the process right now?

Anna: We filmed our first footage, part of the tournament scene, at California Extreme in July 2011. We filmed our final footage, also tournament, in April 2012 at Pinburgh. Principal photography was in November 2011. We completed picture editing for both an eighteen minute DVD version and a ten minute festival version this summer, and we are have been working on audio too. I have amazing professionals helping me, and sometimes my schedule has to bend around their larger projects. In parallel I have been completing a couple companion pinball pieces, including a fifteen minute short documentary called Wade Krause: Pinball Artist. The short cut of Pinball Donut Girl will go out to the festival circuit this fall (SXSW, Sundance, etc) and both long and short versions will be on the DVD when it is available. Everything seems impossibly slow sometimes. I want to deliver the very best film I can so more people will be interested in pinball, people who might never go to a show or hang out on pinball sites, so I try to be patient. 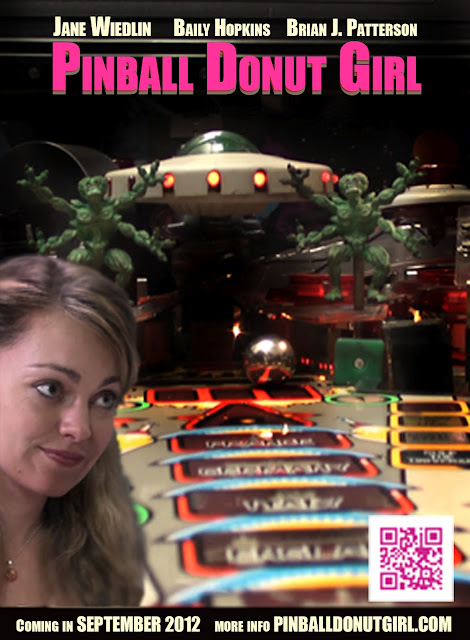 KMC: You mention in your video interview that the owner of Attack From Mars was willing to let you break the backglass for high drama. Can you describe how that moment went down? Was AFM OK in the end?

Anna: We had ordered duplicate normal tempered backglass and a repro translite for the explosion, and our FX artist, Jim Acker, helped TJ Beyer seal up the AFM backbox so no shards would get in the game. Our grip electric team replaced the normal lighting harness with movie lighting. We were all pretty tense when the big moment came. It takes a long time to clean up and reset a scene like this, and we were running out of time. The location contact was starting to get nervous, and I was afraid we would be shut down. I knew we really only had one shot. Don Starnes, the director, got ready to film the explosion himself handheld while the rest of the crew and I stood behind some protective drapes, crossing our fingers. Jim is a total pro and when action was called, the squibs fired perfectly and the glass exploded better than we could have hoped for. Don got the take. Big applause by the cast and crew. We vacuumed the AFM carefully, put all it's original guts back, and no one could tell the difference. Except for the giant mess we made in the cafe. Note to self: bring more drop cloths next time!


KMC: Can you tell us a little more about the Wade Krause short?

Anna: I met Wade through the Pacific Pinball Museum. Michael Schiess and I were at the museum, talking about me making a short film to document the clear machines ("The Visible Pinball" will also screen at PPE this year), and as we were sitting by the register talking between customers, he said, "You really ought to talk to Wade Krause, but he lives way out in the valley; you'll never go there." I turned out that Wade lives in Clovis, just minutes from my hometown, and I was going the next weekend to visit family.

The minute I entered Wade's workshop, which is kind of like a mad scientist lab for pinball art, I knew I needed to come back with a real camera. I only had my flip with me, but I filmed Wade in his office in front of the wall of illuminated backglass, and couldn't wait to return. For more than a year, I followed Wade around California's central valley, to PA, and all over the San Francisco area documenting his work. He is not only an incredible artist and craftsman, he is one of the most magical people I know. I tried to show that in the film. You can see his passion for pinball and life in everything he does. (A not so secret secret: Wade also likes second hand stores -- we played hooky for a whole day in Pittsburgh junk shops.) Wade Krause: Pinball Artist takes you "behind the backglass" to see Wade at work and tells the story of his efforts to spread pinball awareness.


KMC: How will people be able to see this film?

Anna: I hope people will be able to see both Pinball Donut Girl and the Wade Krause documentary at a film festival or game/pinball show near them. Festivals are the best way for short films to reach the broadest audience, and my goal is to make more people aware of pinball. I want them to know pinball is cool, unique, and very much alive. We have a small game room at work (Elektra), and this year it got a pinball machine. I hope my projects had something to do with that. Festivals like to screen films that are not yet in general distribution; after the festival circuit, the DVD and downloads will be available to everyone.

Anna: If I had the financing, I'd make a feature length version of Pinball Donut Girl. There has been some interest, but nothing solid yet. Film is the most expensive medium to tell a story in, literally. Normal professional camera lenses alone rent for around $200/day, then you add a decent prosumer camera with the needed matte box, batteries, filters, etc, a grip truck with a few lights, a few people to run that camera and set up those lights, a makeup artist, a sound recordist, actors, food for everyone, and even if your location is free and your actors bring their own wardrobe and everyone does 3 jobs and eats pizza, it adds up pretty quickly. Not to mention someone to edit the footage after, add the foley, music and sound effects, and insurance and parking for the whole thing. There is a big quantum leap in cost between home video style films intended for youtube ($100s/day), low budget indie films ($5-15K/day), and Die Hard 27: The Explosioning ($100sK per day). I try to work really smart; I have a small business background, and I think I could make a Pinball Donut Girl feature with good quality for around $200k.

KMC: What's your favorite pinball machine at this point?

Anna: I am currently obsessed with Cosmos, this old EM game I played at Pinburgh. I'm not sure why; something in the colors just really appealed to me. I'm also into Zaccaria games. I like Time Machine, for example -- the music is so funky. Funhouse is probably my fav "normal" game.


KMC: Why do you think people should play pinball?

Anna: I play pinball because it is a full body experience. All my senses are involved - well maybe not smell, I hope! - but I love the way the sounds and the visuals all work together and the game is real and tangible and honest. We tried to show that a little in my film. I love the way every game is different and challenging.

People should take a break from the virtual world and try the real world experience of pinball. If you like engineering, geek out on the physics and probability. If you like art, get into the backglass, cabinet and playfields in their huge variety. If you think Super Meat Boy is hard, try to beat Black Knight 2000. Whatever you like, pinball has it. It's got it all.


You can follow Pinball Donut Girl news on the Pinball Donut Girl website, Facebook, @pbdg_movie on Twitter, and if you're in the San Rafael, CA area, here's a link to the Facebook Event page for the premiere screening.  Huge thanks to Anna for taking time out of her busy post-production schedule for a chat!
Posted by Unknown at 8:00 AM